Skip to content
Home » Amicable Divorce: Is it really possible?

Amicable Divorce: Is it really possible?

Believe it or not, plenty of couples (65% in one estimate) manage to get through a divorce in a grown up, civil way.  It’s not an easy thing to achieve, but it is quite possible.  The word “divorce” is so tied up with images of court battles, bitter arguments and financial wrangling that it can be hard for anyone to believe there is such a thing as a “good divorce”.  I know a divorcee who was told he was “weird” because it was all “far too friendly and no-one’s punched each other yet”, which is the typical attitude of most people when it comes to how they imagine separating couples’ behaviour.

It shouldn’t really be that surprising that two nice people who fell in love and got married but then for their own reasons decided to separate CAN actually be nice in the process of divorce too.  If you both would like to somehow get through this divorce with the minimum fallout possible, then you can do it!

Agree to have an amicable divorce

Committing to having an amicable breakup is the first step to actually having one.  Once you decide that is what you are both going to work at doing, even if it means a bit of extra work (although less hard work in the long run), then congratulations!

The next step is to work on your communication.  Ain’t that the hardest thing in the world, considering poor communication may have been one of the things that sped you up the divorce path in the first place…  Conflict can be round the corner at any point.  Try to be open about what you would like to happen re money/ kids/ arrangements whilst also accepting that your ex will have their own views.  It’s OK for you to have different outlooks and if you do, the next step is negotiation.

Many amicable couples turn to outside help such as mediation for negotiating the biggies and this can be a real key to keeping civil – when it comes to stuff like money and children, having a third party in the room can really help keep the emotions running at a sane level.  Look into divorce counselling or financial mediation if you think these topics could be too much for you to agree on between just the two of you. 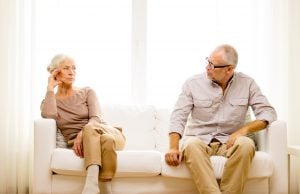 At some stage you probably will argue or disagree strongly about something.  Don’t be too hard on yourself OR your ex if you do.  You are now two individuals strongly motivated to look after your own interests, with a tendency to mistrust the other one’s motives.  But their motives are effectively the same as yours “I want to have what I think I deserve”.  Negotiating a path where both of you are relatively happy with your lot is tricky and there will be points where you don’t agree.  One of the things that will keep your separation on the right path is how you deal with conflict.  If you can both bury the hatchet, apologise and somehow get to a stage where you can agree a compromise and move on then you’re on track for a civil divorce.

A final point worth thinking about is whether you are involved in the blame game.  Coming out of a relationship is demoralising and confidence sapping and a natural consequence of separation is to try and make sense of what the hell it was that went wrong.  If you’re going through that thought process, try and take responsibility for your side of things.  Yes there will be blame on both sides.  You might find your ex tries to lay a lot of blame on you, because it’s quite a natural response to want to point the finger away from ourselves.  Don’t rise to it if you can.  If you get through this amicably, in time your ex may see more clearly where they were at fault, but they’ll have to get to that stage on their own.  All you can do is realise for yourself what you should take responsibility for, or as a friend of mine puts it “own your own shit”.  When you do this, you can make allowances for your ex and also perhaps avoid making the same mistakes in your next relationship.

So, with that in mind, good luck going down the amicable route.  We’d love to hear some stories from Divorce Clubbers about how they achieved a civil divorce, as inspiration to all of us still going through it.

Lucy Davis is a co-founder of divorceclub.com and a TV Producer. She divorced 7 years ago. She is a passionate advocate for exploring the potential for change and creativity that can result from the trauma of divorce.

I’ve joined! How do I meet other Divorce Club members?

How do I cancel membership?